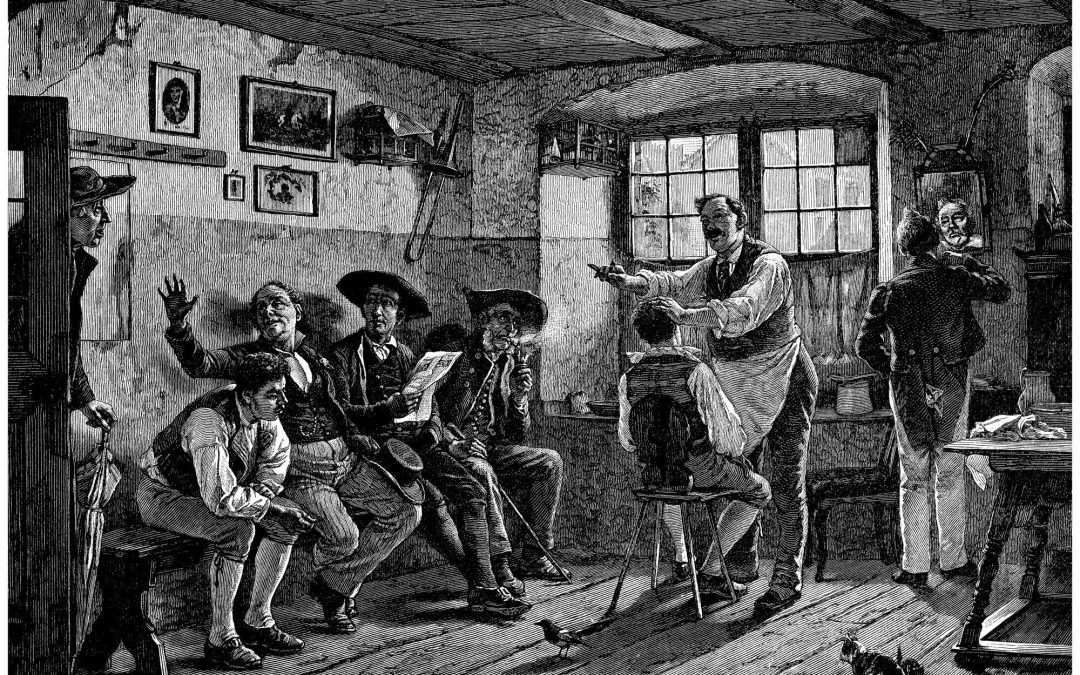 Of all the routine things that people do, from doctor’s visits to seeing a therapist, getting a haircut is one of the appointments you likely find yourself making most often. Since over 59 million Americans had upward of four haircuts in 2018, you’re in good company if getting a trim is a regular part of your schedule.

Despite the irreplaceable function that barbers and barbershops perform in our society, most people don’t know the history of this awesome profession. One of the things that can help you understand how barber’s jobs have changed across time are the styles of clothes they wore while clipping hair and trimming beards.

Here, we’re going to take you on a journey through barber’s history by looking into what they wore and how it impacted the profession.

Imagine you’re back in medieval times. You go in for a haircut, and your barber is wearing a surgeon’s outfit. You wouldn’t be surprised in the least, because barbers at the time were primarily surgeons.

These barbers would ride their horses into battle and use (admittedly outdated) techniques to treat those with injuries. This may actually be the origin of the urban legend that is Sweeney Todd, the demon barber of Fleet Street!

When these surgeons didn’t have anything else to do and were hanging out in the estates of their warmongering employers, it made sense that they would cut the hair of the wealthy. After all, they knew quite a bit about anatomy!

For this reason, barbers in the Victorian and early Edwardian eras dressed as high-class gentlemen. Think cravats, suits, and ties — the whole nine yards! Though sometimes, a cape would be worn to keep the suit’s quality from deteriorating when hair fell onto it.

In 1904, though, personal razors were marketed for the first time as being efficient and convenient alternatives to barbershops. Since gentleman’s clubs were already a big thing, people didn’t need these gathering spaces and began to clip their hair at home.

In World War I, this became increasingly the case. Because soldiers and surgeons were out in battle, they would use these razors to trim their own beards and not worry about going to the barbershop. Barbershop visits became scarce among men.

Ladies salons, on the other hand, thrived. Women began to take over jobs that men had vacated. You’d probably see barbers wearing simple dresses like Rosie the Riveter because they were strong women!

In the 20s, barbershops made a comeback. The war was over, the economy was booming, and above all, people wanted to have a good time.

Barbershop workers and singing quartets had really cool outfits in the 20s. Think boater’s hats, which are always jaunty and cool with the little ribbon around their straw. Barbers would wear red and white vertically striped collared shirts, mostly. Bow ties were also a must.

Since people would gather at barbershops for fun, just like they had before the razor ruined everything, the economy boomed even further and sales rocketed. The barbershop industry roared almost as loud as the decade!

World War II (And Its Aftermath)

You know how history makes a comeback? Well, similarly to during World War I, barbershops were less common again during the second world war. During this time, most people who did cut hair were soldiers giving military cuts to other soldiers. This means, of course, that you’d be seeing your barber in uniform.

What’s more interesting is what happened after the war ended. There weren’t a lot of jobs available, so many veterans went to barber school. Some were really passionate about hair cutting and are still open today as independent practices!

Barbers like WWII vet Bud Adams come to work in suspenders, collared shirts, and soldier’s caps. Their passion and inspiration lives on even now, and these outfits should be viewed as a sign deserving of the utmost respect.

While ’80s barbershops were a lot like those you can go to today, we couldn’t write an article about fashion and not include the styles of the 1980s.

Like anyone, your barber probably had a perm as big as the one you would ask them to give you. If not, they’d have the mullet that your brother dreamed of having. To top it off, neon shirts (collared for the professional setting) and high-waisted jeans were also probably a part of the wardrobe.

Today, barbers dress professionally and sensibly. Both men and women can wear collared smocks that zip in the front so they can be taken off and cleaned easily. It’s also usual for barbers to wear smocks or capes under their usual clothes.

These outfits reflect the values that we have today: comfort and cleanliness. Like anyone in the modern workplace, barbers have a job to do and are proud of their work.

Across time, barbers have been surgeons, social callers, fighters of Nazis, and fashion icons. Talk about a rich past for a seemingly simple profession!

If you’re interested in learning more about barber’s history or sharing your interest with a group of pupils, we offer school programs where we cater to the fashion needs of your specific program.

Click here to learn more, and remember to check out your barber’s outfit the next time you’re sitting in their chair!